Across the 8th, 9th and the 10th of November we brought the Artaissance offline. Seven Sangamers draped the walls of the Rangoli Metro Art Centre on M.G Road, Bangalore. From acrylic to water colours; wildlife to a slice of life; their diversity was both meant to be appreciated and remembered. Over 250 guests and art lovers visited the gallery. Among them were also talented artists who have chosen to join the platform.

Art lovers had the unique opportunity to interact with artists and learn more about their art and inspirations and subsequently make purchases.

We featured 35 of our Sangamers incredible artworks. You can find them and more below:

Each of our talented Sangamers struck a pose. Have a look at what ensued next!
[Best_Wordpress_Gallery id=”80″ gal_title=”The Artists Wall”]

We had some celebrities in the house! A numerologist for the stars and an art prodigy graced our gallery.
[Best_Wordpress_Gallery id=”81″ gal_title=”The Celebrity Watch List”]

No event is complete without family and friends and, we had the pleasure of hosting quite a few of them!
[Best_Wordpress_Gallery id=”82″ gal_title=”Family and Guests”]

All the banter and laughter brought us all together. United by art and bent on championing the Artaissance, strangers became friends. We learnt quite a bit about art and its many forms and we also learnt much about each other.
It also helped that we were a fun group of people!

Here is a snippet of all our artworks on display!

If you want to join our RTS family, why don’t you submit your art for curation today?

We our very proud to bring you are very first gallery and offline celebration of art.

In colour, experience and own the world our Sangamers have created on canvas. You are cordially invited to the RTS Gallery!

“We are working tirelessly towards the success of the Artaissance! But between the outreach campaigns, many calls, planning and execution, we as founders of RTS have been blessed to share many banter filled conversations that keep tired minds ignited.

My partner in crime, Kshitij Pathak (Co-Founder of RTS) and I have wisely or unwisely (you be the judge of that) decided to invite you to be a part of our banter. Apart from desperate attempts at humor, we speak of what’s happening on our shop floor and what comes next! RTS podcasts brings you the very first episode of ‘The two Id**ts that run RTS’. I hope it’s more enjoyable than cringe inducing”

Watch episode III of ‘Say your piece with AD’ starring none other than, Sangamer Kritika Krishna.

She is a multi-lingual Poet, Youtuber, Podcaster and Meditation Trainer. The conversation revolves around her professional coming of age story. Furthermore, her muses, inspirations and art take center stage. So hit play and enjoy our conversation:

You can access her podcasts at Soundcloud by searching for it by inputting her name. Find Kritika’s artwork, meditation services and youtube channel here:

We are proud to bring you episode II of ‘Say your piece with AD’. AD engaged Sangamer Sawab about her muses and her journey as an artist. What we hear is a  love affair with her motherland Kashmir.  Sawab speaks of how pain, suffering and, loss were turned into artistic expression. Her valiant effort which speaks of Kashmir from the perspective of a Kashmiri is powerful! So take a deep breath and dive right in!

We would like to apologize in advance for the audio quality. Sawab was speaking to us from flood effected parts of Maharashtra. Climatic conditions caused some network issues.

Secondly, we respect Sawab’s opinions and truly sympathize with the plight of many in Kashmir, Jammu, and Ladakh, but we hold no political opinions or affiliations. Sawab’s opinions are her own and deserve a platform but don’t represent RTS in any manner.

This is the first of many podcasts under the banner of ‘Say your piece with AD’!

Say your piece, is all about discovering the artist behind the art. AD engages talented artists from around the world and quizzes them on the experiences, people, and emotions that inspired them to create.

This week we probe into the artist who goes by the name of Swwati Awasthi! Her art can be found at: 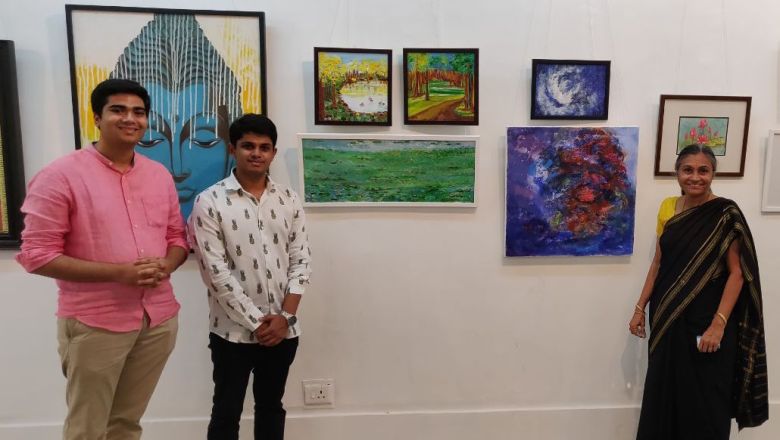 It was our pleasure to join Sangamer Usha at the 44th Annual Art Exhibition organised by the Tamil Nadu Arts & Crafts Improvement Association, held in Chennai between the 8th and 14th July. She was recognised during the opening ceremony of the exhibition and felicitated with a memento.

We were audience to the works, of accomplished painters and sketch artists, that adorned the walls of the Lalit Kala Akademy. Mr. S. Rajendran, the Joint Director of Arts and Culture Dept. of the Tamil Nadu government inaugurated the exhibition.

Usha was accompanied with her daughter who also happened to be a featured artist in the exhibition. We believe art runs in the blood line.

Should you want to feature upcoming exhibitions or events on our platform please send us your request here.

We will soon get the ball rolling on RTS events and exhibitions! We look forward to the day where all RTS artists can collectively share a stage. For now find Usha’s work here:

We asked a simple question but in return received many profound answers! Add to these answers and join the Artaissance.

Niranchana
“I have a deep regard for nature, especially open spaces & macro details around and photography allows me to express that respect. My clicks shows, myself getting closer & personal with nature.”

Kristen
“I think my work gives me the courage to say things I wouldn’t normally say. And helps me to express myself in ways that help me deal with anxiety, stress, love all those emotions that are sometimes too much to handle by yourself.” 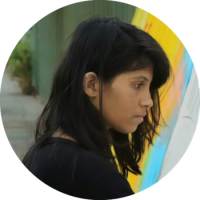 Rutuja
“The magic of my hands display a tint of reality along with creativity sparking in between.Theres also a mysterious source of strength,the reason of my boldness! It also reveals how passion and persistence flows through every cell of my body.”

“I have been trying to find the balance between perfection and contentment, which shows up as a struggle of simple and complex in my art. Sometimes I end up drawing all the details I see; and sometimes just colours and shapes that capture my eye. The tiny sketchbook I carry around is full of scribbles and splotches—a reflection of my minds. Be it walking around the city, or out in the nature, the constant activity is both energising and tiring.”

Navin
“I’ve always had a lump in my throat when it’s come to my emotions. Somewhere down the line, I found that with poetry I could speak volumes when I couldn’t with my voice.”

Anirudh
“It speaks of what I feel and what I feel is everything capable of stimulating me!”

Kshitij
“My art summarizes my thoughts and in turn expresses what I think and who I am to those who play the part of a faithful audience.”

“I’m connected deeply with all form of art through words(poetry), colours and music(vocal)….For me it’s reaching the beauty within to connect with smile and purify for being a cause to live and spread smile and smile for me is an expression of god within.” 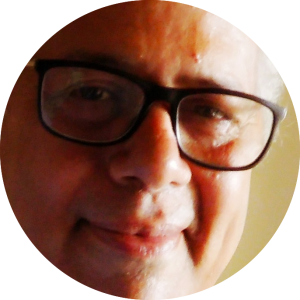 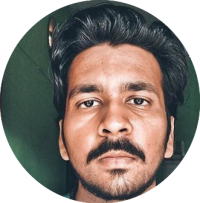 Aditya
“I find it amusing to make the faces of people all around the world and try to capture their expression and facial features . I has become a way for escape for me from all the negativities , expectations , and complexities of the world.”

Usha
“For me art means medium where my thoughts and passions are expressed. My canvas is my  mirror where I self reflect.”

“Good art conveys ideas, emotions and, the motive behind its creation. Beyond the aesthetic, we must persevere for a balance of emotions. Used until turned into a cliche but still, beauty lies in the eye of the beholder. Changing mediums lend credence to changing perceptions. But powerful art is an expression that is above medium, language or craft, for it speaks of lived experience. Rebecca Louis Law claims that her best pieces of work were produced when she had been challenged in life.

There is no universal formula to create a piece of art. Everyone has to find their own path. But forging a connection with the viewer is fairly universal. It needs to have some element of truth to it that resonates with the viewer and leaves them with something, even after they’ve left the piece.

You are left with questions? Perhaps, it teaches you what you want to learn? It draws from the artist’s experiences only to make you reminisce about your own.”

Shobana Mathews, our literature curator, is a Bob Dylan fan, period. When someone publishes a dissertation titled ‘Folk Song as Poem: A Critical Study of the Lyrics of Protest Folksinger, Bob Dylan’ they earn their claim.  Read her serenading Dylan on the occasion of his birthday and join in on the celebrations in the comment section!

” Bob Dylan, the original vagabond! In your own words, Bob, may you always know the truth and see the lights surrounding you… (Forever Young ,1973)

In the lifetime I have known Bob Dylan, as a restless teenager to an equally reluctant academic… these words haunt me…surfacing in times of conflict, in times of temptation to give in and conform. Then that liberating call to be a rolling stone, on your own, with no direction home.

And every minute is a reminder that if I’m not busy being born, I’m busy dying.

From the topical protest songs like Hurricane (1975) to the hilariously dystopic and breathlessly surreal Bob Dylan’s 115th Dream (1965) to the intensely evocative and much covered All along the Watchtower (1967), the sheer magnitude of Dylan’s imagination is researcher’s delight.

Joan Baez refers to him as the ‘unwashed phenomenon’ in her bittersweet lovesong to him, Diamonds and Rust (1975). She creates an unmistakable profile of him…dismissive of her poetry, restless, tender and yet haplessly drawn to his ‘Madonna’, an allusion to their tumultuous love affair.

Referred to as the guerrilla minstrel for his political activism and the trovatore bifronte (troubadour of the two faces) …the critic and the entertainer… Dylan has never stayed long enough to be pinned down with a carefully formulated phrase.

And as I raise this vodka in a champagne glass to my lips and murmur softly, Salud, my friend …many years and avatars to you …I know you’ll stay Forever Young, you Joker, you Thief, you horseman of the apocalypse! “